Why invest in China?

As the second largest economy in the world, China is too big for investors to ignore. Yet the nature of China's economic growth model in the past has raised questions about its long-term sustainability.

So, why China – and why now? In this article, we examine the economic landscape that makes the People's Republic of China a potentially attractive market for investors in Australia and around the world.

The Chinese economy has grown remarkably in the last two decades, and it now plays an active and constructive role on the global economic stage. Between 2000 and 2016, China's share of global GDP more than trebled, from 4% to 15%, moving it ahead of Japan and putting it in second place, just behind the United States, whose GDP share decreased within the same time frame.1

In addition, China has played an increasingly important role in world trade. In 2000, China was responsible for just 2% of global imports and exports. Those numbers have increased significantly, to 10% for imports and 11% for exports, as of 2016.2 Outbound investments relating to the PRC's Belt and Road Initiative – an ambitious (and controversial) plan to improve transportation links between China and its neighbors – could also spur the world economy and encourage economic cooperation.

While this economic growth is promising, it's unrealistic to expect it to continue at such a dramatic pace. In fact, China's growth rate has more than halved in recent years as the country's heavy reliance on investment and exports fuelled by massive debt accumulation has become unsustainable.

For China to progress onto a more sustainable growth path, Vanguard believes emphasis must be placed on growth quality as opposed to just quantity. Indeed, policymakers in Beijing have begun to shift their economic priorities.

Recent government decisions and regulations, such as financial tightening and supply-side policies, make it clear that Chinese leaders are committed to moving towards a healthier growth model. And while these developments may have a slight dampening effect on growth in the short term, they have made Vanguard's economists and other observers more optimistic about China's long-term prospects. We have started to see encouraging progress in rebalancing policy priorities from investment to consumption, and from manufacturing to services.

As shown below, over the past decade, consumption has contributed more to GDP growth than investment while the service sector has risen to around 56% of China's economy.3 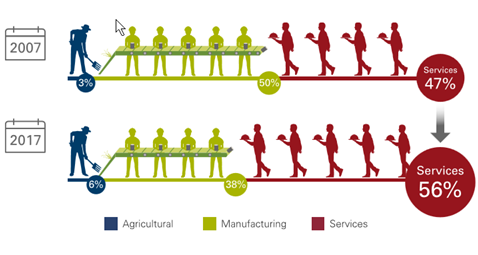 The most likely outcome: Smooth rebalancing

Vanguard believes the future of China's economy will be shaped by two main domestic forces: macro-level policy cushions and progress on structural reform.

In the short term, the PRC's leaders will need to skilfully use policy tools to engineer a soft landing – that is, a gradual reduction in the GDP growth rate that avoids pulling the country into recession. In the long term, China will be tasked with implementing structural reforms that effectively bolster productivity and GDP growth while staving off the stagnation that often afflicts middle-income countries.

As outlined below, other possibilities include a hard landing (with attendant capital flight and risk of recession) or Japan-style stagnation. However, Vanguard believes prudent policymaking, a supportive macro policy cushion and structural reform progress have lowered these risks. We envision a smooth rebalancing as the more likely outcome over the long run.

The Chinese government has an array of monetary, fiscal and regulatory tools available, along with the ability to unleash long-term growth potential by implementing timely, effective structural reforms. This should bode well for long-term growth potential and should enable the PRC to remain a vital and productive participant in the global economy.

In short, we believe China's importance to the world marketplace will continue to grow, and that the risks of a hard landing are muted by recent economic developments. With this potential for long-term growth, investors in Australia and other countries will be well served by understanding their options for including exposure to China's dynamic market in their portfolios.

It is a condition of using the BPAY® facility that you obtain and read the current Product Disclosure Statement (PDS) for the fund into which you are investing prior to making each and every investment in a fund, as the PDS may be updated or replaced between the time you last invested and when you make your next investment. A copy of the most up-to-date PDS (including any supplementary PDS) will be provided free of charge upon request. Alternatively you can download a copy or request a copy from adviser services on 1300 655 205.